Free USB charging stations are popping everywhere. For anyone with a smartphone, it is a relief. We have come to rely entirely on devices that can't last a full day. There is more entertainment then ever, bigger brighter screens, a constant connection to the internet, yet the best a smartphones has to offer is 3 to 4 hours screen time.

The alternative is to lose our mobility and find a nice cozy spot near a wall, and plug it in. This in it self is a feat. Not that long ago, every phone came with it's own version of a charger. It was rare to see two people with the same device, so they could rarely share their chargers.

Enter the USB cable. Today I can say with confidence that there are two types of cables: the iPhone cable, and the Android cable. Not their technical names, but chances are if you meet someone with an android device, you will be able to share cables.

Although convenient and it forces us to be more social, it is easy to forget that less then a decade ago, we didn't have the problem of charging our devices. In 2005 I had a Nokia dumb phone and running out of juice was the least of my worries.

I'm not gonna turn this into a nostalgic article, in no way would I be able trade my current phone for an old Nokia today. But I do want to appreciate the lack of a battery problem in these old phones. I'd charge it once every two or 3 days, and rare were the times when I would spend more than an hour at a time on the phone. Today, I can conduct all my business on a small device. From bank transactions to fixing bugs on a server, all at the convenience of my finger tips any time of the day. Except when I run out of battery of course.

A few days ago, I took the bus in Los Angeles. And to my surprise, the bus station bench was equipped with a solar powered usb charging station. How exciting! I plugged my phone and spent 3% of my battery instead of charging it. I was taking videos, photos, posting on twitter. 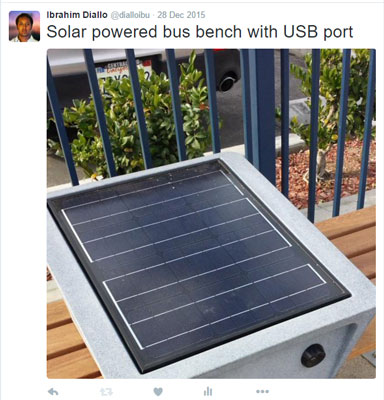 This seems very convenient. Anywhere we go, as long as we carry a USB cable, or if we are at a place equipped with wireless chargers, we don't have to worry about running out of battery.

Many people concerned about security avoid charging their device in these stations at all costs, it could be used to steal our data at the convenience of free juice. But the majority will not and do not think twice before plugging in the device that contains every information about ourselves.

We will become dependent of these stations with time because they are just every where and seemingly solve an important problem.

Let's look at the car industry for a moment. The Ford model T, which is considered the first modern car, was manufactured in 1908. It consumed 21 miles per gallons. Compare it to the Ford Falcon of 2008 that runs at 22mpg. This is 100 years of constant iteration and the numbers haven't changed much. But something did change.

In 1905 the first gas station was built in the US. The second one followed 2 years later by the company now called Chevron. So when the Ford T came out in 1908, it was not very convenient to drive a car around. If you ran out of gas you were, you couldn't just get gas on the next station or call triple A. But quickly gas stations started popping up all over the country. Today, almost every block of a major street is fitted with a gas station. Some intersections have a station at every single corner, making the driver utterly confused.

Here is the problem, if gas prices go up, there is nothing we can do about it, you have to fill up your car nevertheless. We can't move away from gas stations either because every one owns a gas powered car, which is a 2 ton brick if not filled.

Gas stations, or USB charging stations, none of them are solving the ultimate problem of energy. They are giving us a temporary relief until we need our next fix. They are soothing our symptoms.

As USB charging stations become more available than they are today, we will depend on them entirely. We will have more power hungry phones that we'd have to plug in if we want to use it for more than a couple hours.

In the long run, they becomes harmful. They are diverging the efforts and reasons to work on better and longer battery life. If we can have a station on every corner, why work on a longer lasting battery?

Now that my excitement about solar powered USB charging station is gone, I will ask you to boycott these stations. I know it's hard. I am currently writing this at a Starbucks where my laptop is being conveniently charged. This is where the "free" in Free USB charging station becomes not free. I get free electricity if I pay for their delicious coffee.

But wouldn't you rather have a laptop, smartphone, tablet, or any mobile device, that would give you at least a week worth of battery? Not impossible, we just have to focus on the real problem.

Follow me on Twitter, RSS Feed
Next: The best way to add custom web fonts
Previous: A Terabyte of RAM

Bringing back the PC

If an arsenal of computers put a man on the moon in the 60s, today the USB stick dangling on your key chain could make miracles. Of course not all computers are designed to do something as great. You may be using your old PC, that some have claimed to be dead, to do mundane tasks like surfing the web or checking your email. This same computer, that first of all belongs to you, second is consistently connected to the Internet, third is relatively fast speed, can do much more than just allow you to check your email. I would like to introduce the PC 2.0 no different then the previous PC, simply re-branded for marketing purposes. 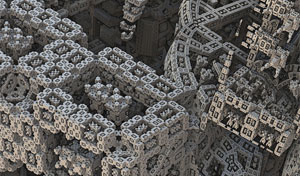 How bad is bad UX?

As programmers, we tend to neglect the side of the business where there are people involved. You see great programmers that won't dare touch frontend code even with a yard stick. I worked as a frontend developer and I am still afraid of the user interface.