When the story is that of a young man in California with a backpack and a laptop, it is usually one of tech and disruption. I was in California, I had a backpack, I even had the laptop, though mine was a defective Powerbook G4 and I didn’t live in Silicon Valley. I did no such disruption.

In fact, my story is one that is not often explored by Hollywood. It is one of a poor African boy, trying to pave his way in the city of Angels. I had no dream of world domination, I had no rich family to give me a boost, I had no degree to show for. What I had was a family that depended on me, and an able body to do any job that was offered. And a defective laptop.

Through luck, persistence, and divine interventions, I found myself working in the highest echelons of technology.

This is not the book that will motivate you to buy a Macbook Pro and start coding. It's one that explores the humans that try to hide behind the technology that powers our everyday lives.

Such a fascinating storyteller.

I was very psyched to talk to Ibrahim and to include his story in LAB RATS.

A very creative, very entrepreneurial, a software developer, a good blogger and all that kind of stuff.

Why don't you find a good job and get married.

Your Writing Is phenomenal!

You should be a writer on Black Mirror.

This might be the best single sentence I've read on the internet so far this year.

Sign up and be the first to learn when the book is ready. 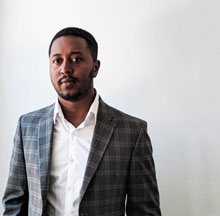 Ibrahim Diallo is a software developer, a tech blogger, a storyteller, an entrepreneur, and a writer.

On the web he is known as the man who was fired by the machine, though there is a lot more to him. He has been blogging around the web since 2008 but his most current blog is iDiallo.com that he started in 2013 and quickly went viral when he wrote about the state of the PC, "The PC is not dead, we just don't need new ones."

His blog was a personal tool he used to help him learn how to write, and five years down the line, it paid off. He demonstrated his prowess as a storyteller with another post that reached hundreds of thousands of views, "Why we are hiring Angular Experts."