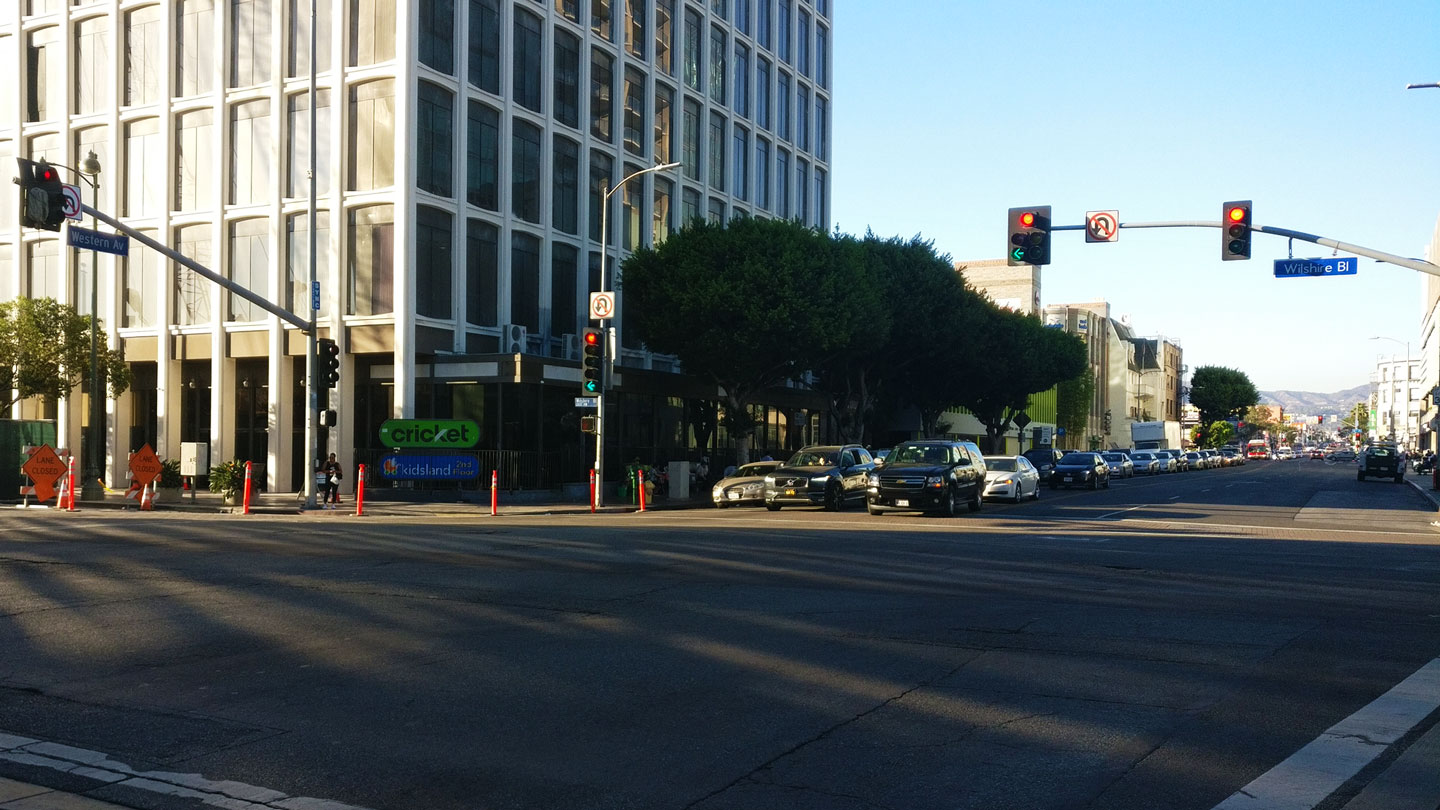 And you think you had it tough

I want you to take a moment to look at this picture. The average time to appreciate an elaborate piece of art is only 7 seconds. But I fear in 7 seconds you will not appreciate what is actually being captured. And I can't in good heart call it a piece of art either. What I would like to focus on, is what hasn't been captured.

There is nothing spectacular about this picture. It was taken in a haste, there was no time for framing, no time to include interesting shapes. This picture was as sudden as the story I want to tell you about it. It just happened in the spur of a moment.

This is the corner of Wilshire Boulevard and Western Avenue in Los Angeles, California. Here there was a sort of story, that turned to myth, later turned into a legend. Now I can barely say that anyone remembers it. You see, it was not something that was put in the news, the only people that knew of this story were people that were passing by and decided to pay attention, even if it was for a minute. And for those who know it, they are too ashamed to tell it, because they are afraid their listener would ask, "And what did you do?"

Her name was Guadeloupe, or Maribel, or Lupita, or Guadalupita. I don't know, but it must have sounded traditional and common for an old Hispanic lady in her sixties. In the corner of Western and Wilshire, right next to that "Cricket sign", she sat hunched over on a wooden stool that was half made of duct tape. She was no taller than the young school children that passed her by on the side-walk.

In front of her was a blue cooler with a white top where she stored some of her juicy fruits and on top of it was a box that must have been reused a thousand times to transport bananas. She sold fruits. All we know is that every Thursday and Friday she was there. She might have been there the other days of the week, but I wouldn't know.

She was in her sixties, but the wrinkles on her face must have been the result of hard labor every single day of her life and it added 10 years to her age. When she used her hands to carry that box, they trembled. It looked like they would break, but she had done it a thousand times. She must not have a family. Who would let their mother push a cooler under a hot sun, and count on her to sell fruits in the middle of the street all day long to make a living. There is no way she made more then 20 to 30 dollars a day. The fruits were sold in cents and she didn't even have that many.

This is sad, but it is very common. In the U.S., you have to work. You just have too.

One day around 2pm, when most children come out of school, she had setup her little area where she would sell her fruits to passer-bys. The streets were filled with cars at this hour, the traffic is infernal. The side walk crowded with middle-schooler and high schoolers running about in every direction. It's chaos but it is also her clientele.

In the middle of all this, you could see the little old lady's hand shaking as she carried her box, opened the container, sold fruit, and closed it back up. But the last time she put the box of bananas down, two kids passed her by. One of them, slid his hand in the box and sliced a piece of banana loose. It was a quick sleight of hand, like he had done it a million times before. Lupita saw him.

You would think she was used to it, it was only a piece of banana. But this was her livelihood, her merchandise. Selling fruits on Wilshire and Western was her bread winning. She must have made so little money that losing one banana was a huge dent in her income. So she turned red and screamed at the boys.

She got up from her chair and in slow wobbly steps she ran to the middle of the sidewalk. Her running was more of a walk. She had to stop and yell her lungs out. The two kids sniggered. They didn't even turn to dignify her presence. They just kept walking. She would never be able to catch up. And if she walked too far away someone else would get a hold of the rest of her merchandise.

Her skin was red, her bent legs came out of a shapeless skirt with dark flower patterns. She wore a sweater in the heat of the day. Her hair a wisp of white, thin and long as spider webs. She yelled in a desperate voice. The crowd walked around her annoyed like she was a pole that was inconveniently erected in the middle of the way. No one did anything about it.

But miraculously, cops appeared right at the light. It was as if God had answered her prayers. She called to them and they stopped. She yelled, and pointed at the two kids that were walking away. The two cops turned and looked at them. The kids turned back and saw the cops. No bad deed will go unpunished today. Those two kids froze, if they ran this would turn even worse.

The cop on the passenger side came out of the car. A hero in his own right. Tall, dressed in black, his hair cut precise, and his badge shining like the very symbol of justice.

"You know this shit is illegal right?" he said. He went to her little corner and carried the box of bananas like it weighed nothing. He took the box to the trash can by the bus stop and smashed it into it. She froze. The lights lit up on the cops car but made no sound. The other cop came out of his car and carried her cooler. He took it to the trash and emptied all of its content in it. They stood there like two tall figures speaking on the radio. The two kids in the distance ran away.

She just stood there. She had turned a hundred years older. It was as if her bones had melted and the skin folded in itself, wrinkling her whole body. Her eyes were absent like she was looking at an old memory, somewhere far away. The crowd took over the street, walking in every direction, passing her by.

Time passed by, the crowd decreased, and she was no where to be seen. If you look at the picture above, that's what you see now. Her absence.

She had very little. Fruits that could not feed more than 20 people before it ran out. It was taken away from her. For a while, her stool was left there next to the wall where she sat. Every time someone would ask why this stool was left there, a witness would tell her story. Now even the stool is gone.

I was sitting at a cafe across the street when I heard the story. We were discussing the idea that "There is always someone in a worse situation." This story was indeed a testament of it but, I feel ashamed of using it for this purpose. Everyone took something from this lady. Her banana, her fruits, her cooler, even her duct tapped stool. And now we share her story and take one more thing from her. A lesson.