In 2013, I have started this blog. It's not the first time I do it but it is the first time I stick with it for this long. There are some projects that I made that took years to come to fruition only to be forgotten. I plan, I code, I consult, I code, then I give up. With this one, on march 26 at 12am I had some ideas I wanted to share but had no medium to do it. So I opened my IDE and started coding. One hour later I had a simple CRUD/blog ready to be deployed. In the following few days I started writing and on April first I published my first post. Sure I could have just installed WordPress but I'm a developer and where is the challenge in that? 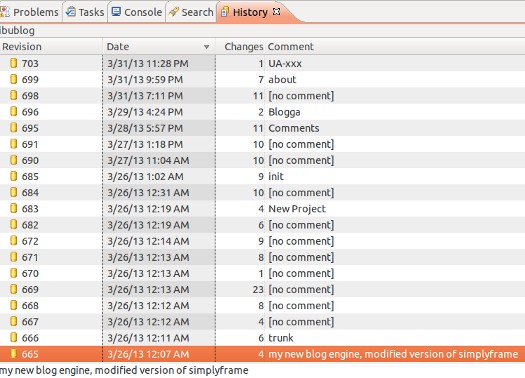 I did not create twitter or create the next big thing and if you check my past there is no "one great thing" that made me popular in anyway on the Internet. In other words, this is a ghost town. So if I get one person to read my blog and leaves satisfied then I have a reason to keep going. I don't know about satisfied, but on April 15, two weeks after grand opening, there was a whooping 574 users reading my opinion on whether a college degree is important or not. You can make fun of me for the 574 but it was more than enough to keep me going.

Writing is not something that comes naturally to me. I like it but it is hard. The conversion from thoughts in my head to written words is like comparing being at the beach watching the sunset and receiving a post card with a picture of a sunset on it. Not quite the same. After 8 months of writing I can say that I am getting better. But more importantly I learned that sharing your thought is what matters, your audience will help you find the right words.

To date, the most popular thing I wrote is about the Personal computer lifespan. It was a game changer for me. It made me understand that even though a reddit user said that I write at a 7th grade level, what matters is that my audience understands my message. If you haven't read it yet check it out.

Other than the blog, there are other realization I made in the year 2013. Like this one:

You should be unhappy with code you wrote a year ago. If you aren't, that means either A) you haven't learned anything in a year, B) your code can't be improved, or C) you never revisit old code.

I firmly believe this; every time I look at my old code I have the impression I was on something when I wrote it. However, quotes from the humble programmer are becoming a cliché nowadays. Even the person who has been programing JavaScript for a couple weeks say that their code sucks just to fit in, but they still act as experts. I, too, am guilty of this. I read a few comments I made on Stackoverflow and apparently at some point I called myself an expert in JavaScript. I did make a lot of important contributions for my current employer in JavaScript. I optimized the front-end of some sites and made it blazing fast. But this is just a tiny little field in JavaScript and I can in no way call myself an expert today. There are many things I have yet to even try in JavaScript, MVC frameworks being one of them. So today, when I say I don't know something, I mean it. I am not trying to sound cool. I have absolutely no freaking idea what I am doing.

If I have to summarize 2013 it won't be much different from how I feel about 2012. Every year we get better. Doesn't matter if it is a small improvement, as long as we suck less every time. Go back to your new year's resolutions from 2013 or the previous years. Write them down if you have to. Yes there are a lot of things that you abandoned but thats not the point.

Well it's your list. You know that you have improved in something in someway. Now it is 2014, you have a blank slate again. Let's suck a little less this year.

Follow me on Twitter, RSS Feed
Next: We are getting better at being distracted
Previous: I make shitty software with bugs ... we all do

The comments are for my readers not for myself

I hope this post doesn't turn into meta-blogging but since this idea is itching me I might as well get it out. It has been 4 months since I started this blog, after many unsuccessful ones, and I sure am satisfied. I have not written any master piece (yet) but people did seem to enjoy a thing, or two about what I have to say. By enjoy I simply mean that I had lots of visitors on those pages. The comments section says otherwise; and boy comments can be mean sometimes.