You know those things you hate and don't even know why? Some of them you never even had to deal with to hate them. But everyone does so you too hopped on the bandwagon too. 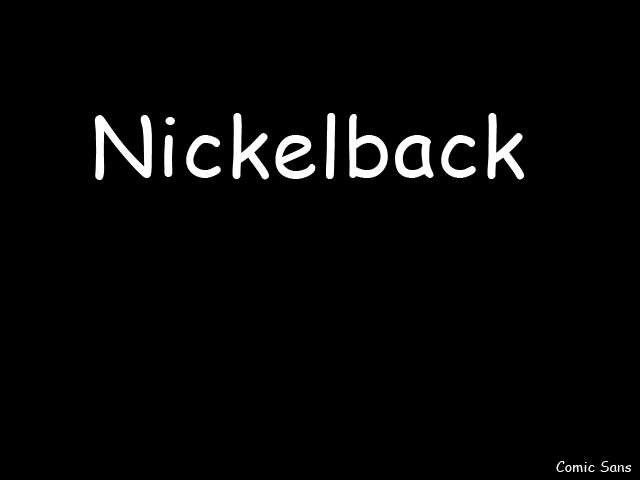 When I first heard people using "That's because you love Nickelback" on forums around the web, I didn't get it. I thought it was reference to something else not the band. I tried to listen to some of their songs, sure they are not the greatest, they are not the worst either. (Justin Bieber is the worst, but more on that later)

Comic Sans get the same rap. I love how it was tackled in this stackexchange post

[...] One reason will sound snobby, but I think would explain a lot about how designers tend to think about this sort of thing. Imagine that you're a wine connoisseur and, everywhere you go, you see people not only buying boxed wine, but saying it's great wine and that they know something about wine because they found this box in the state store.

The idea is that trained designers don't really like people using Publisher anyways, so they're more inclined to hate on designs that are done by amateurs who pick Comic Sans because "it looks fun" or whatever. Then, once you've established that it's cool to pick on Comic Sans, everyone gets lumped into that group.

Here is a list of other things that are hated passionately:

Here is a quote I butchered because I don't remember where it is from:

If you hate something, it's probably because know very little about it.

Instead of jumping aboard and hating things just to be approved by your peers, do research. Go check comic sans yourself. Use it in a presentation and see peoples reaction.

Go on YouTube and listen to Nickelback. Sure you might not like it, but think now. Is it so bad that it hurts your ears? Nope.

The more you familiarize yourself with it, the less you will hate it. Who knows, you might even like it. Just like that song you used to hate.

Follow me on Twitter, RSS Feed
Next: Ebola testimonial: Tafarel, the surviving medical student
Previous: How much should an ebook cost