I often don't use any framework to do my work unless it is part of the requirement. Often I am accused of trying to reinvent the wheel while someone has already solved the problem. I didn't want to include jQuery to the code, because at the time, I thought I didn't need it at all. Don't get me wrong, jQuery is amazing, and I highly recommend people to use it, after they have learned and mastered JavaScript. But even though I don't always use these libraries, I often steal from them.

I spent an evening trying to make sure my code runs when the DOM is ready. It worked like a breeze on Chrome. I tried it on Firefox, made a few tweaks and it worked just as well. Then I went on Safari and my code was not running at all. This was when you couldn't rely on DOMContentLoaded. So I spent the whole evening trying to find a way to make it work, and couldn't figure it out. I thought Safari sucked and went to test it on Good Ol' Internet Explorer and my page loaded silently, without ever firing the event.

I had no way of knowing whether this code would work on the multitude of browsers. So I did what any programmer would do and added jQuery to my page. I was confident about all other parts of my code because I don't use browser sniffing anywhere, I use feature detection. But I had to include the whole of jQuery's library just to make use of one feature. Not happy about it.

I slept on it. The next day, I opened the jQuery file and searched for DOM ready and read the whole section. Then I copied the section and resolved all the variables.

Around 45 lines of code or a kilobyte uncompressed. Just like that I had the feature that I wanted without downloading the whole library. And the guarantee that it will work across all browsers.

I designed my PHP framework from the ground up. I have used it on multiple projects for clients and it is very efficient. However, I borrowed code from a lot of places. I have worked with Symfony, codeignitor, zend, and many more, and whenever I have encountered issues that I couldn't solve, I used those frameworks as reference. For example, when I had edge cases in my router, I looked at Symfony's implementation to fix the problem.

I like to be in control of my code, that's why I have a very hard time using NPM. Instead, I go to the source, read the code and then copy it. My buffet approach might be a slower process but at least I don't have to worry about a left padding issue.

JavaScript, how do I check if this variable is an array

It is common to run functions that return results in JavaScript. With JavaScript being loosely typed, the returned value can be of any data type. In case it is returning an array, there isn't an obvious way to detect it, because arrays are also objects.

Responsive web is here to stay. Some websites are very hard to read when presented at full scale on a tiny screen. I found it cumbersome to rewrite all my CSS styles inside a @media tag to make it responsive at different screen size. However, lately I have been using a few lines of codes that make my page look good no matter where it is displayed. 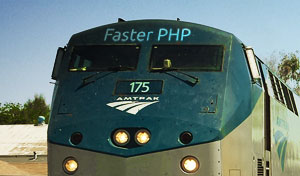 Making PHP as fast as a Web server to send files

Web servers are very good at streaming files and currently Nginx holds the throne when it comes to serving static files. My blog used to go down every time I get a spike in traffic but now I serve all my static files with Nginx. However, there are times where you don't want to serve files directly. You want to add a layer of security before serving it. How do you serve the files efficiently with PHP?