It was 2012 when everyone gathered around a cubicle, carefully trying not to step on each other's toes. “So sorry!” one would say. “It's fine.” another would answer. It was an important day in tech and stepping on someone's toes to get a look at the dual monitors was only a minor offense. But the monitors were not the main attraction. It was what they displayed. The manager opened two browser windows. One on each screen and scrolled one at a time to allow everyone to see it.

On that day, Facebook invited the world to see a marvel of architecture, technology, and productivity. They unveiled the largest open floor plan in the world. No walls. Everyone worked in a single giant warehouse-like room. The manager read passages from the article where it listed all the advantages over a traditional office space.

It was common for us to watch what other technology companies were doing to innovate. We were in our humble cubicles not in Silicon Valley, but at the doorstep of LAX international Airport. Yet, you could hear a pin drop on the carpet. When someone spoke on the phone, everyone could hear the conversation. So people were mindful to take their personal calls outside.

When there was big news, a manager 5 rows away would say “Hey everybody, I have some news.” Heads would pop out of cubicles all over the north side of the building to pay attention. Working was a silent affair. The manager assigned a ticket to you, and you updated its status to in progress. When done, you marked it as complete, and left a detailed comment. Interacting with another person was optional.

But if you wanted to interact, you'd send an asynchronous message on your favorite Instant Messaging client. Empathy in my case. Your colleagues did not have to respond right away, only when they had down time. When they did respond, you wouldn't know if they were sitting in the next cubicle, on the floor below, working from home, or in Mexico. It was all the same.

At the same time, we were not isolated. At lunchtime, we all gathered and walked in a large group to the plaza and ate together. But comparing us to Facebook's new open plan office, there was only one word I could use to describe us: Lame. 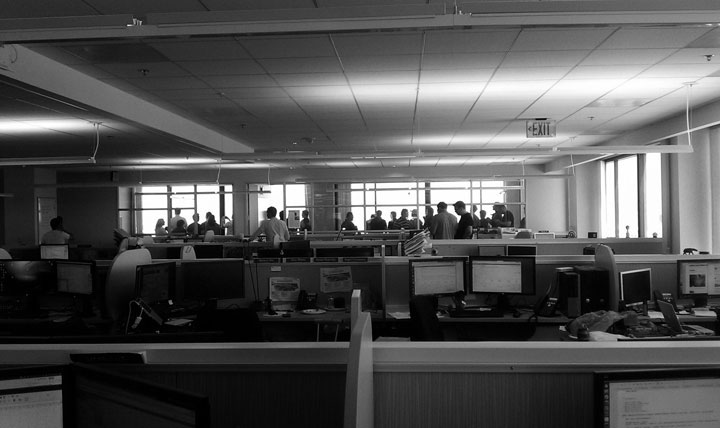 Then came Memorial Day. For our hard work, positive cash flow, and a national holiday, we were rewarded with a four-day weekend. On Thursday evening, we had to clean up our desks of any personal belonging, there would be a construction and repair crew coming in. My cubicle was empty if not for some novelty coins I use to jokingly tip anyone who helps me with a task. I tossed them in my pockets and left for the holiday.

Tuesday morning, I arrived at work expecting a change. But this was not the change I expected. The big dividing walls that separated each cubicle were gone. The front wall that separated me and the coworker in front had been replaced with a much shorter one. My coworkers were surprisingly close to me. In fact, when I came to sit, they had to scoot over.

It didn't matter though, we were like Facebook now. Our office was not designed by Frank Gehry. But you can only do so much when you are in an eleven-story building and have to redesign every floor over a long weekend.

The office had a different vibe now. This was my chance to add skinny jeans and scarves to my wardrobe. But it didn't take long for friction to start. At first, I took it as the natural reaction to change. When you work in the same setting for two years, you form habits and muscle memory. When I stumbled in my work routine, I believed it was only a matter of time before I'd get used to it. But I wasn't getting used to it. In fact, it was annoying.

The first friction came in when I tried to send a message to my colleague sitting right next to me. There is this awkwardness when you can see the notification pop on their screen. And they see that you saw them looking at the notification. Yes, they are busy and can't get back to you yet, but you see them ignore you. And they see you being ignored.

“I'm sorry, let me finish this task and I'll get back to you.” They would say verbally. The asynchronous communication we had grown accustomed to faded away. Now, people would turn to you and talk, interrupting whatever you were doing. Talking out loud became the norm. Instead of privately resolving issues, you'd talk it out loud for everyone to hear. The most annoying thing was when you find yourself, literally, in the middle of a conversation. Your colleagues, the one to your left and the one to your right, would talk over you without involving you. You'd have to sit there and wait for them to finish talking so you can get back to your work.

People were talking in front of you, behind you, to your sides. Instead of sending a message, you'd walk to the next row and interrupt your colleagues, and they'd do the same. I can't say for others, but my productivity took a hit. Sometimes, the only time I could work undisturbed was at lunchtime. I'd skip lunch and use that time to catch up on my tasks queue.

The more my team grew, the more my colleagues and I accidentally bumped chairs and elbows. Where there were five employees in a row of cubicles, we crammed eight people.

At this point, open plan is the norm. Most companies I joined after had designed their own version of the open plan. The teams often shared a single long table or a doughnut shaped one. Try dropping something in the doughnut hole, and see how awkward it is to crawl under the table with your colleagues around you. Sometimes I waited for the after hours to retrieve my pens.

I've watched Office Space, and yes cubicles represent being a cog in a wheel. But going back to cubicles was a relief to me. I didn't have to wear earphones and pretend to listen to music, so I don't get interrupted. I didn't have someone talking to me randomly throughout the day. I didn't have to bump elbows with people. Most important of all, I could work at my own pace.

As far as the advantages of open plan design goes, I can vouch that productivity is not one of them. However, it does give the illusion of productivity. Everyone is always talking.

Follow me on Twitter, RSS Feed
Next: With RSS, You are in Control
Previous: I stood up to my boss, then he got promoted

The current state of marketing

Marketing has gone a long way. In the old days, not very long ago, marketers had the upper hand. They would show their product on TV or magazines, and people would buy it. The only way to know about the product was through a salesperson, who will say good things about it because they get paid just for that. You buy the product and move along. Today, we don't do that.

When I started working in a big company, I had my own space. I had plenty of time to myself and privacy. Every worker had his own cubicle. When I had a question for the lead developer, going to his cubicle seemed like entering his house.