I love games but I am not that good at making them. I do enjoy writing code that runs them but it hardly makes sense to the end user. When I saw a tweet from Thatgamecompany about a Game jam right here in Los Angeles at USC, I didn't hesitate a second to sign up. March 14th here I come!

Am I going to make it?

On March 12th, I got a call from a friend. This wasn't the kind of call I usually like to answer, but it was a friend. He asked me to help him move on the following Saturday. The very same Saturday the game jam was to take place.

I thought long and hard on this while he was still waiting on the line. "If I help him, I can't make it to USC. If I go to the event, I will be a bad friend not helping those in need. Whatever!" I said OK.

8 am on Saturday morning, 90 degrees, I was tightening my work gloves and was ready for manual labour. It went surprisingly fast and at 12pm we were done.

I came home and looked at the email from the all too excited game jammers. I tossed my phone away, took a shower, then took a nap.

At 4pm, there was another email from the jammers: 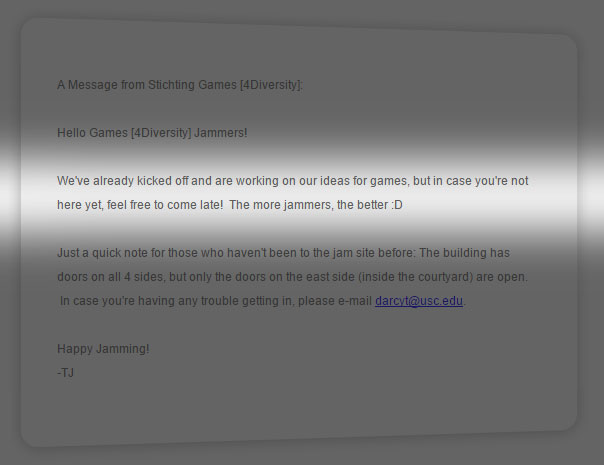 I immediately started calling to make sure it was not just an automated email. Once confirmed, I grabbed my laptop, my mouse, and my keys and drove to USC.

Once on site I consulted my eTicket that was sent the night before for the exact address. Obviously it had the wrong address. It also said the event starts at 11pm. Can't trust those things.

I was already feeling bad for being late. Calling for direction was going not going to be an option. I roamed for an hour on campus. No one knew about the game jam.

I texted the number on the email, and TJ was very glad to give me the instructions. 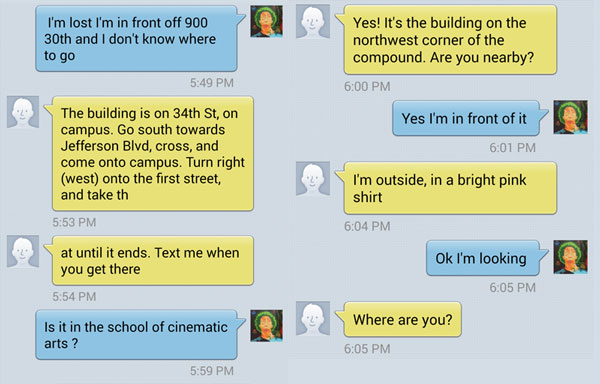 What I didn't tell TJ was right when he said pink shirt, there was a girl that passed with a pink shirt, deeply immersed in her phone. She had to insist that she was not TJ ...

6 pm, 8 hours late, and finally I can start jamming. Only when I walked in a room full of people I realized that I don't know the first thing about making games.

The room was divided in two groups. It looked like they had already worked on their stories. One of the team leads introduced me to both stories and asked me which team I wanted to join. I chose the team with the fewest members.

OK. Now is a good time to tell you what this game jam thing is all about.

Obviously I came a little too late to be in the video.

Diversity was the theme of the day. The team I worked with had a vague idea about what they were going to build. They had found a nice Hawaiian folklore but hadn't laid it down yet.

If there is one part I felt useful the most, this was it. Laying down the story, talking about the characters, the why, the how, making schematics, that I did. I was surprised because I had never done this on my own projects. Every time I thought of making a game, I fired up Unity, tried to code, failed, watched a few tutorials, came back, forgot what I was doing, rinse and repeat.

This time because we were a group (of three), I got to explore the process better. I can't just put all the thoughts in my head into the game, I ran it through my teammates first and only the good ideas stayed.

After a long process of ironing the story, drawing storyboards, coming up with a game play, we got into the business of making "The Night Marchers" into a game.

I'm mostly familiar with Unity 3d, but I can't impose that on others. I have worked as a programmer for a few years, so I do feel comfortable with complexity. My teammates were students. Plus I have to admit, there is a very long learning curve with unity 3d.

We settled for a freely available HTML5 game engine: Construct 2. It was quite easy to learn. There are some free tutorials right on the website. The very first one was exactly what we needed.

The cool thing about construct 2 is that you don't need to know anything about programming to work with it. My teammates picked it up fairly quickly, to tell you the truth they mastered it in a jiffy while I was still trying to figure out what the program does in the background.

We spent the evening doing tutorials and learning as much as we could before getting started.

10pm, lights out. The day was over. My plan was to go home and work on a few more tutorial to get a head start the next day. When I got home, I decided to rest a little before burning my eyes for a few more hours in front of a screen. You know, because I was moving fridges, sofas and what-not earlier in the morning. So I rested. I fell asleep until the next day.

Day two, I arrived at 11am. I was confident enough with construct to get started. There was one thing I had trouble with however: making assets for the game. I am not very good at drawing and if I had to make anything that would be appealing to the eyes it would have to be something taken from the internet. There are two places I found good assets to get started.

CC Search is amazing, it searches all the websites with royalty free images. Most of the assets came from there.

One thing I didn't know was that the Sunday session was to end at 5pm. I had 10pm in mind so I didn't rush when working with assets, until 4pm.

We divided the tasks among us. One person did the music and sound effects, one person built the game play, and I did the assets. But as the deadline approached we each contributed to other tasks. For example, I ended up not just making the main character, I also added the directional input to move him around. I also designed one level. The others worked on sound FX, designed other levels, and also made cool visual FX.

Time just seemed to fly by. Suddenly it was time to deliver and there were still more things to do. Here is what we completed:

And the things that didn't make it to the game:

The game jam session was roughly 20 hours, of which I only participated 11 hours. Obviously we were not going to create the next AAA game. But what I found amazing is the fact that we had a playable game at the end. Both games that came out were very original.

I could see a collaboration of these teams to build something awesome. The narrative of the other teams was very cool, ours had more game-like interaction. Together we could have created an even better experience.

What I learned from this event.

Before I came in, I didn't think I could make a game of any sorts. I was too invested in the technical aspects of things and always derailed from my main goals. This experience helped me draw a line between the two. It is important to have the right technology for the job, but what's more important is having a fully laid out plan to build the game.

Writing everything down on a whiteboard makes it more real. Sometimes the ideas in your head are terrible, and you can only realize when you see them in writing or try to explain them. We all know that explaining is very hard. Working with a team forces you to do just that.

The game jam is over but we are still here. We remember the experience. And now, we are not limited to the time constrain. If we even work for an extra week on it, it will only be more amazing. And I hope I can keep up with it, if not this particular story then another. I think I have seen enough in those two days to be able to work a little something, even if its on my own.

The other amazing thing about this event are the people I met. It's not everyday you get to spend as much time with people who want to make games. It definitely changes the pace of the web programming world, where I spent so much time working to please a Robot (Google is a robot!).

I'd like to thank my teammates, Rama Gosula and Alexia Knight. It was really cool working with you and I hope I we get to do more in the future.

This was my first time participating in a game jam but it will not be the last. I have learned so much in just two days, and I know the more game jam I attend the better I will get. It is definitely something I recommend and If you are there next year I look forward to being on your team.

Thank you for reading.

Follow me on Twitter, RSS Feed
Next: Making PHP as fast as a Web server to send files
Previous: Things to consider before switching to nodejs

There are different strategies to learn something new. With a book, some people perform best with the step by step pattern going from chapter 1 to 12, others jump straight to the section they need, and some others ditch the book entirely and jump in to the problem only to find that they actually need a book or some way to acquire knowledge. I fit best in the third group. When it comes to learning I am always in a hurry. A few years ago when I was still in school, I was frustrated with the pace at which we were going in class. I did slow down eventually eventually but this had lead me to learn things in a very disorganized way.