There are lots of interesting papers about artificial intelligence. A simple google search will give you tons of material to read. Artificial intelligence is more advanced than ever and is used in so many fields. But if you ask the average consumer, you will hear that we are just not there yet and one of the examples sited will be Siri.

In my Electronics and Computer Hardware Technology class, the teacher insisted that computers are so dumb. The class would start with his daily "Computers are so dumb that they can't even <insert something a human can do here>". I think it is unfair to say that. You wouldn't compare a tomato and a wolf right? Comparing a man and a machine could be just as different.

One of the short comings of Siri is not that it cannot find what you are looking for; note that natural language processing is incredibly complex. Siri fails because it cannot keep up with everyday conversation. Most people I have seen using Siri will say something like "Do you love me Siri?" Obviously the only way to answer this question is to have a hard coded clever answer that will make the user giggle.

User - Do you love me Siri?
Siri - I am sorry, I don't want to hurt your feelings.

Other cases will be when you ask a legitimate question and She politely presents you with a google search result. We get disappointed because, "She" didn't know the answer and had to go find something on google.

How long would it have taken him to click on the mail app and write a message?

Let's say Siri did not have a voice. If it was just text based, we will probably not have any of those videos on Youtube. If she didn't have a conversational type of interface but more of a command one, kind of like a keyboard for your voice. Less personal. She wouldn't sound as impressive in the keynotes but she would be just as practical. In fact, we will probably use Siri more siriously.

Siri creates an illusion. She pretends to be human by having a very natural voice. How can someone or something with this elegant voice not understand what I am saying? Naturally we try to have a conversation with her and realize she is not so smart for a human. But for a computer, she is a marvel of technology. You have to admit, this video is impressive.

Artificial intelligence is used in more places than you might imagine. And in most places there is no need to make it look human. Just for you to access this page, a machine had to figure out the best route to pass the data from my server to your computer.

When you shop online, most website use some AI (machine learning) to determine what you are most likely to buy. If you went on Amazon and a little guy popped on the screen with a funny voice and told you what he thinks you should buy, you would probably freak out. When you learn to accept him, you will ultimately get mad when he presents you with products you have no interest in. Right now, you just see a list of recommended items. If you don't like them, you ignore them.

Amazon recommended list. If a little comical character showed me the list, I would probably think he is stupid because I own those already.

Search engines online and offline use AI to improve the search result. Whether you are searching on Google, or you are using the local file system search. And those are amazing. Slap a voice on those, and you will be less tolerant to their faults (looking at you Cortana).

This is probably due to the effect of the uncanny valley. The more human we try to make those services, the more repulsive they will be when they fail to be human.

If you think about it, nothing was wrong with Clippy. In fact, all Microsoft did was remove him and his companions. The help feature is still available today; you type your question and the application tries to give you the best answer possible. Clippy was just there to give it character, just like Siri and Cortana. 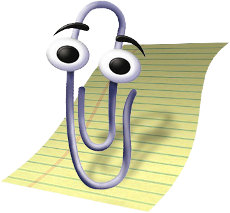 Artificial intelligence's goal is not to recreate human behaviors. Humans are far from perfect. Recreating our behavior perfectly might limit the machine instead of improve it. Humans get tired, they age, they get moody, they never do the same thing twice the same way. When I pass my debit card in the ATM I want it to behave the same way all the time. I don't want it to be grumpy, or read the numbers wrong. It is a better replacement of a human for this specific task.

An AI does not need to have every single feature of a human. If my mobile phone excels at enabling me to communicate anywhere I find myself, I sure don't expect it to also have a nice conversation with me. (unless I have a converser app)

I talked earlier about a new role for the PC as an assistant. If you notice, all the features I mentioned mostly move the computer in the background with minimal interaction from your part. The goal of AI is to create result. Better results. If you want direction to your favorite restaurant, the goal is to get to the restaurant. We don't care if the direction are read to you, written, infused by telepathy, as long as the technology allows you to get to the restaurant.

Follow me on Twitter, RSS Feed
Next: How to excel at your Interview
Previous: What you do as a web developer