It's a common thing to hear programmers say, "I threw this thing together over the weekend". I find myself saying it all too often, even right here on my blog:

With this [blog], on march 26 at 12am I had some ideas I wanted to share but had no medium to do it. So I opened my IDE and started coding. One hour later I had a simple CRUD/blog ready to be deployed.

And I even documented one of my quick little projects in the same spirit. I don't know about everyone else but when I say it, it is to boast. The smart developer that created a facebook/twitter clone in just a couple days. The guy that single handedly created a website that shook all the online dating industry (plentyoffish.com). These are stories we all like to hear and we want to be that guy or gal. Unfortunately, the title is the only thing that is compelling in these stories (if you don't want to put much effort in your work). If you dig a little deeper, you will see that any serious project requires a lot of work. 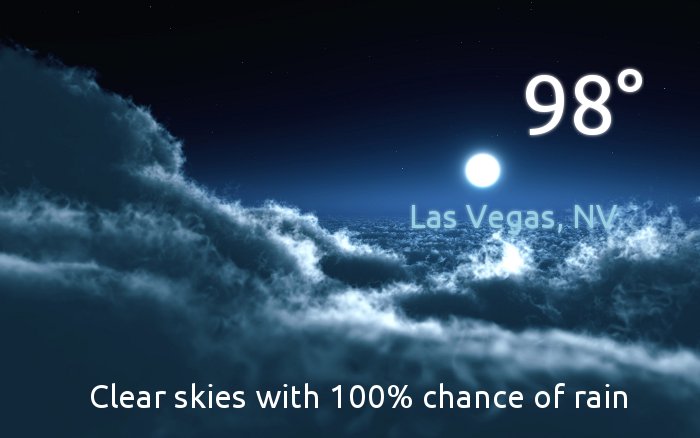 I threw this weather app together over the weekend. Sometimes it is actually accurare... only sometimes.

Twitter bootstrap is great, but not so much the bootstrap mentality. Bootstrap is a resourceful tool with exemplar coding practice. Just reading the source code made me a better developer. But I think using it for every single website is missing the point. Just like the name suggest, use it to get that initial push you need to get your project running.

This is not suggest that projects that were completed in a very short time should be neglected. You have to spend more time on it to move it from prototype to product. Real work takes time. If you want results you will have to put the microwave mentality away.

The comments are for my readers not for myself

I hope this post doesn't turn into meta-blogging but since this idea is itching me I might as well get it out. It has been 4 months since I started this blog, after many unsuccessful ones, and I sure am satisfied. I have not written any master piece (yet) but people did seem to enjoy a thing, or two about what I have to say. By enjoy I simply mean that I had lots of visitors on those pages. The comments section says otherwise; and boy comments can be mean sometimes.