When at the movies, you whisper. When in a stadium, you scream your lungs out. At a funeral, you are dead silent. The context of the place you are in determines how loud or soft you talk. But it doesn't end there.

The conversations you have at McDonald's are not the same as those you have in a high end restaurant.

All this to say, you are influenced by the environment you are currently in.

On the web, it is not so different. Despite the absence of physical connection, web communities behave the same way. Recently I joined a group chat with bunch of my ex-coworkers. I know them personally often communicate with them online and offline.

When chatting on IRC, everyone seems more serious then usual. We talk about work, bug fixes, someone makes a work appropriate joke here and there.

Talking to someone privately on instant messaging makes us closer. At least I learned lots of things about people they wouldn't share with me otherwise. Maybe because it is called private chat.

However, something interesting happened when chatting on Slack. If you've never used slack, let me tell you about its most prominent feature:

If you spent any time on Reddit, you will know that GIFs are a core part of the community. There is always someone who will post a GIF related to the current conversation (or unrelated).

Talking on slack with a bunch of people I know, is the same experience as talking with a bunch of strangers on Reddit. Why? Because the two share the same context. It's all about sharing random animated GIFs. And just like on Reddit, it is nearly impossible to figure what people are talking about because everyone is just posting random GIFs. 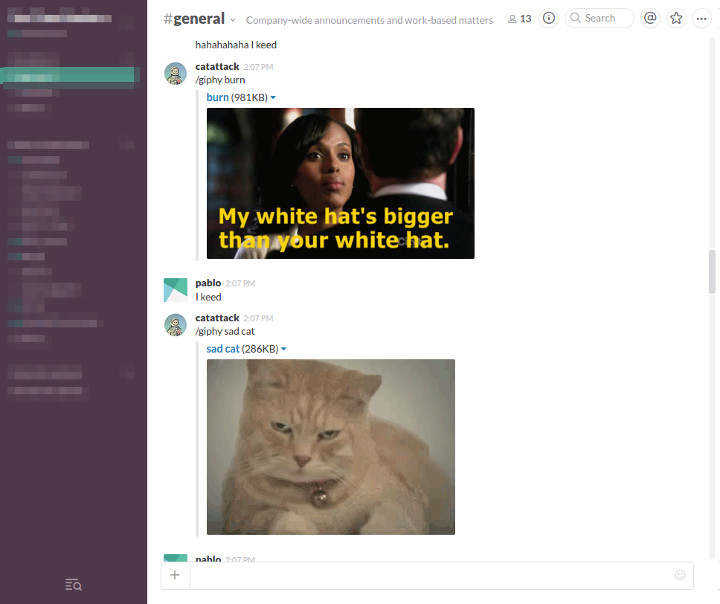 Even though it doesn't use the same layout, the framing makes it all too similar, hence encouraging this sort of discussion.

One popular example of out of control conversations on the web is YouTube. Google had to reverse it's decision to enforce the real name policy because it didn't help solve the trolling problems. When on YouTube, people behave like YouTubers. This is the community it created, this is it's culture. Trying to enforce new rules that seem unnatural to the community is not gonna change the way they behave.

It's easy to believe that the people commenting on YouTube are the problem. But in reality, YouTube is it's own problem. This is the context and community it created from the very beginning.

A person may sound harsh on YouTube, but behave in a complete different manner on Facebook. And will have another personality on Twitter. We can all agree that having lots of friends on social media is not the same as having in person friends because most of the time, we have no clue who those people in our Facebook are.

You might know a person some way in person, but on Facebook, they have a different personality.

[...] Looking up someone on Facebook does not tell you who they are. Just their perfectly staged photos and witty comments stolen from somewhere else.

Trolling is common on the web not because there are lots of bad people but because we don't take into account the framing of troll-friendly interfaces.

In a community like stackoverflow, they do take this problem into account. They use Just in Time reminders to people who try to add content for the first time on the website. They use a bunch of other schemes to subconsciously brainwash trolls into becoming productive members of the community.

For example, you see someone asking a bad question. Meaning they didn't take the time to research or do any work. They just slap it in there and want a fully documented response. You are a known troll and take your time to craft a long insult to make them regret their very existence. Right before you press the send button, you see a message that asks you if this answer is going to help the user in any way? You know it won't and you feel bad already. But you still want this person to know that he sucks. So you decide to send it anyway.

Only it doesn't send, because the question was closed by a moderators who all agreed that this question does not help the rest of the community in any way.

Here you are sitting with you long well crafted insult and no one to feel insulted by it, except you of course. The next time you see this sort of question, you are more likely to try to vote it down without adding your negative comment to it. Only when you vote it down, you lose points.

These are small things that seem insignificant but are the very thing filtering trolls out of the community, or making them productive members of society.

Remember this, if you create any means for people to communicate, the interface, the environment and the context will determine the kind of conversation they will be having. It is best to shape it early on before the community grows or you will be faced with the same problem YouTube has.

You can't just blame people who behave badly on your platform. You are responsible for the platform and have the power to shape it any way you like.

I tried to explain the process of interviewing before. As much as I like to admit it is not a rational process. I've had the chance to interview people and my process was just as disorganized.