I got very lucky. I dropped out of college before I got the idea of getting a loan.

Most of my friends that went to fancy colleges (all 3 of them) came out with a fabulous degree and not so fabulous package.

The package included two things. One was the obvious one: Unemployment. It is becoming very common for graduates to throw their hats in the air only to have them fall back and knock them in the head conscious. They wake up and realize this piece of paper with old English typography and curvy signatures is no guarantee to land a job.

With the internet being the future, if that means anything, enrollment in computer science is soaring. It takes a few years, sometimes after graduation, to realize that this is not always the best choice. Computer programming is hard. It's kinda like math, different but all too similar. It's not surprising that programmers end up experiencing impostor syndrome. They learn very complex theories in school only to be tweaking CSS on the job; something that could have been learned after a quick internet search, for free.

I met a very good programmer through my blog. He had spent over five years looking for a job after graduation. I, being a dropout, wrote a blog post questioning whether it is necessary to have a CS degree to work in the field. He told me I was lucky. I am very lucky indeed to have had all these opportunities without having to carry the price tag of college.

He was hired at my workplace and it didn't take very long before I could see the disappointment in his eyes. He was grateful to have a job, but he tells me, everything he does at work are things he learned on his own in the 5 years of job hunting.

Don't get me wrong, we do need computer science graduates. It's just that most are not in it for computer science jobs. They are in for web programming and Apps. It's nothing new to see people studying one thing and ending up in a completely opposite career space. 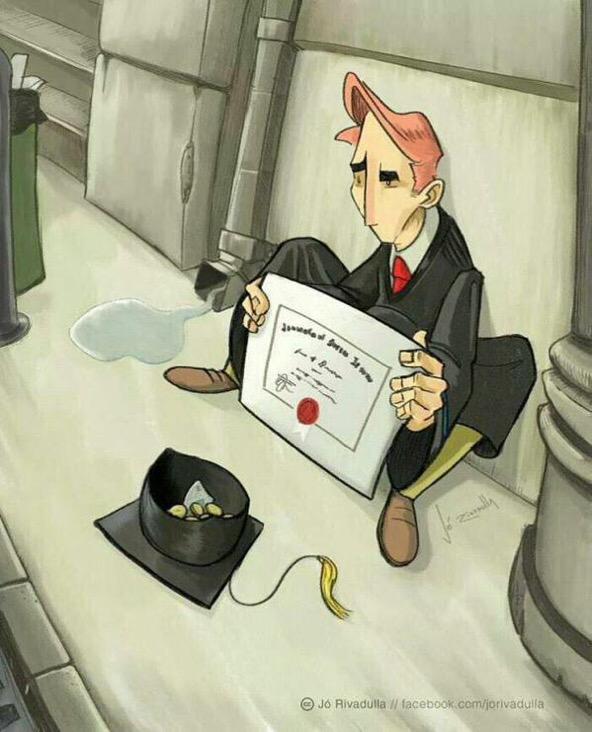 If you only had a degree Celsius instead.

The other important thing my graduate friends received in their package is the gift of debt. I call it a gift because while you are trying to get into a college it is presented to you as a way out. A gift.

A cruel gift. The average adult will never get a personal loan in the hundreds of thousand dollars. As a matter of fact, bankers will refuse to give you such a loan unless you have a carefully planned path with return on investment.

But for a young lad, fresh out of high school, dumb as a thumb, a signature is all it takes to have a loan. Of course a kid sees no problem with it. Even the smart kids are convinced.

If I was to loan you $100 right now, and I ask you to pay me back in a couple of hours you will probably look for another lender. But if I say, "Hey, here is $200, you can pay me back 2 months in two months". Chances are you will accept it.

Why? Because there is no immediate urgency. It doesn't matter if you have a plan to get the money to pay me, you will simply operate through the illusion of time. Making two hundred dollars in two month seems plausible.

That's the trick they use on kids to get them to sign up for these loans. You don't have to pay it until you graduate. Sometimes until you get a job. Sometimes they don't even tell you until when.

The kid will say yes, he doesn't want to be the one kid that didn't go to school because he was poor. And the parents can't say no. They didn't save money for their kid to go to college, shame on them if they were to stop him now that he has an opportunity to become an unemployed educated man.

I was not the smartest but I'm glad I was brought up in a don't be in debt family.

A drop out is a loser in the eyes of the parents, the teachers, the loan officer, and the system. Even though drop-outs designed the world we live in today.

One mentality has to be annihilated. The mentality of thinking that an 18 year old is old enough to be in debt for the next 20 to 30 years. We should think of school as an investment. Not a continuation of a tradition that has outlived its utility.

Lots of companies won't let you rent a car unless you are at least 24. I think this should get us to think about how school loans work.

Follow me on Twitter, RSS Feed
Next: Things to consider before switching to nodejs
Previous: The difference between a developer and a programmer.

Here are a couple of thoughts from a "pay as you go" family (actual term used by the University of Washington finance folks).

1) Total cost for UW including tuition, rent, books, etc. is probably over $20K per year. Pay as you go means that that UW calculates that you have enough FSFA income to not provide any assistance. Yet the "pay as you go" income level does not mean that a family can put aside $80K for each child. Instead you need to spend nothing (disposable), send everything to the UW, and figure out you debt options. Your insinuation that families such as ours should not go into debt is a bit offensive quite honestly (see next point). What we should do is ask for current employer to reduce wage to <$50K so we can get some grants (we have a talented kid).

2) Our daughter was a direct admit to UW's engineering school. Her major will focus on education related to sciences focused on curing cancer. She has had every member of her family die from cancer. She was valedictorian at her HS. She is (biased opinion) a hell of a good student wanting to contribute to finding "the cure" without wanting a top-tier income. You only focused on the fact that CS degrees can are overkill for the job requirements. Might be true, but there are is a hell of a lot of STEM degrees that do not fit this paradigm. YOU HAVE TO ATTEND A SCHOOL LIKE UW. There may be students today who might at some future contributes to finding a treatment that saves either yours or your family members lives. These skills are not learned without a deep immersion into STEM degrees like the UW offers. Suggesting that these kids avoid college avoid "taking on debt" may not be a good idea.

3) What you should address is the fact the the Federal Government has privatized the student loan process forcing "pay as you go" families to be tortured by the fact that if they have a child who wants to "help find the cure", the only options are pretty horrible. The system is as you described: with no credit rating you can sign up for tens of thousands of debt (likely involving your parents credit rating). The private companies (Discovery, SoFi, etc.) get to give you this loan with the Federal govt's aid being that you can NEVER get rid of it. Federal aide is extremely limited when it comes to the total cost of even a good public university, so essentially if you need a loan you get to enrich a private provider.

4) Our family is progressive, and liberal. We HATED Biden's forgiveness "buy Nov votes" plan. Everyone should be challenging the Federal Govt to enact a plan that allows "pay as you go" (income levels >$50K) families to enable their talented kids to get an education (STEM, Teaching, etc) that helps the USA advance and improve the lives of its citizens. What we got is a stupid payback which most analysts generally agree helps in ways that do not do this.

5) We have no problem investing in our kids. They want an education that might help them change the world. We think they can help, you no one really wants to invest in these kids. They want to buy votes by handing out money to everyone. They want to support the "profitizing of student loans" by private companies (likely with associated contributions). If we made less than $50K per year, our lives would actually be much easier, and our debt load likely will be less.

I was a Biden supporter, but he and his wife lost me by not doing something constructive, by pandering to Nov elections, and by not thinking about what might benefit our country.

Perhaps this might cause you to change your focus. HTH.

@SHP I'm not sure what you are arguing about. It almost feels like you read a different article.

You must have missed it, I'm all for education and spend all my time learning to reinforce my knowledge. But I'm not for putting a burden on people, especially when they are too young to understand what they are getting into:

We should think of school as an investment. Not a continuation of a tradition that has outlived its utility.