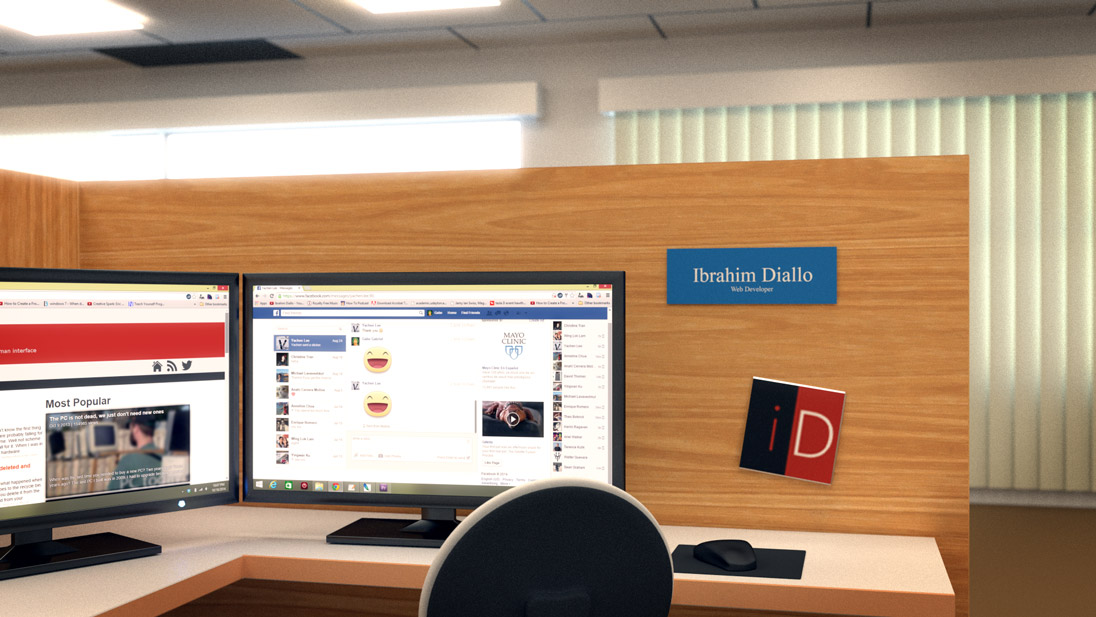 The most important 3D trick I learned using blender

The first time I started using 3d applications was circa 2001. Strata 3d released a free lite version of their application. It was fairly limited, but I just wanted to know how things are done in 3D.

The day I decided to download it, I went around the house and told everyone not to use the phone for the following 4 hours. At the time we were on dial up Internet, and there was no way to resume my download if it was interrupted.

4 hours is very long no matter how old you are, but I patiently waited until the last byte was transferred at the whopping speed of 3.4 KB per seconds.

All I ever managed to do with Strata 3D basic, was make items with the basic shapes that were available. Sphere, cube, cone, etc.

It didn't take very long for me to give up. I made a small animation inspired by the Pixar lamp. Mine was a fan on wheels which is now lost in a hard drive that failed more than a decade ago.

Only recently, I started playing with Blender 3d. With it, nothing was going to happen either. But this time, I learned something new. I watched a few tutorials and learned the very complex keyboard shortcuts. Still I didn't know how to start doing anything with it.

Then one day, I discovered the work of Andrew Price from blenderguru. I learned a lot of cool new things from the tutorials. But the most important thing I learned is that I don't have to recreate a whole world only render an apple on a desk. This may sound obvious but it wasn't to me. For example, the scene of my old office space was going to take ages if I didn't only focus on only what was going to appear on the screen. 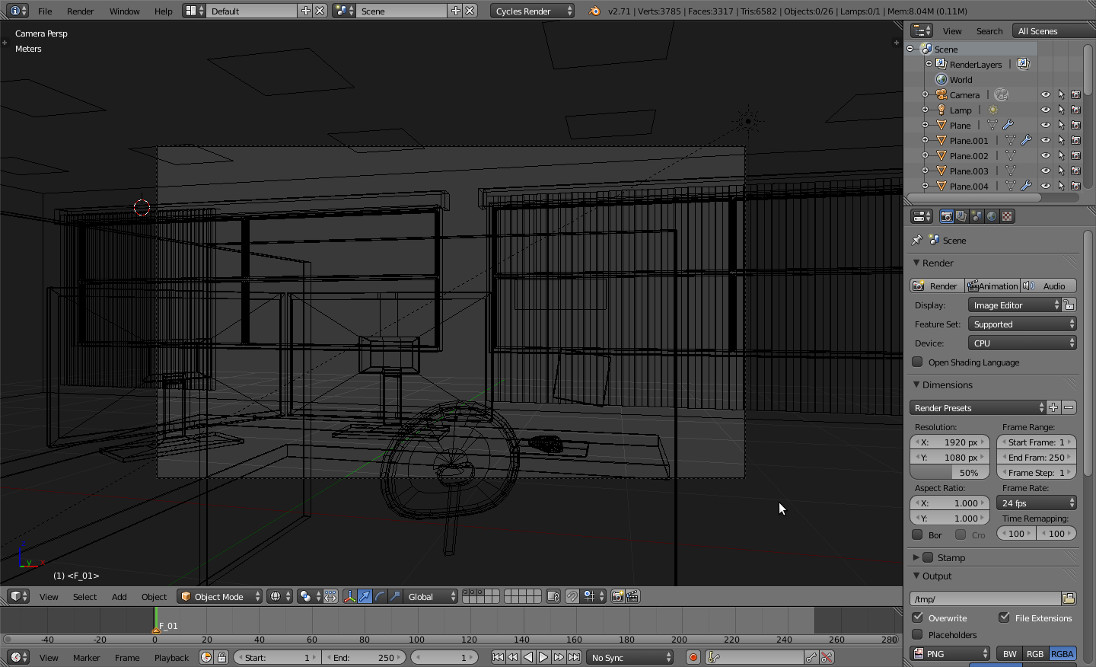 Everything that was not going to be the main focus of my scene did not need to be modeled. 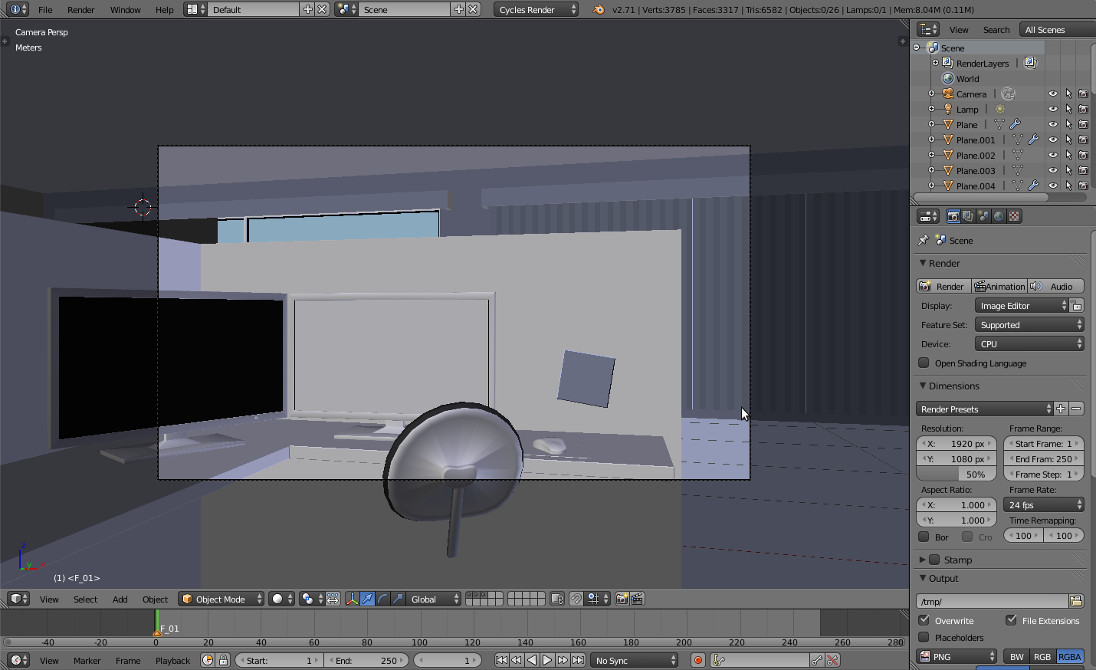 When you move up the camera, well the room is empty. I did not need to have things behind the wall if they were not going to be seen. (in the past I would have modeled everything) 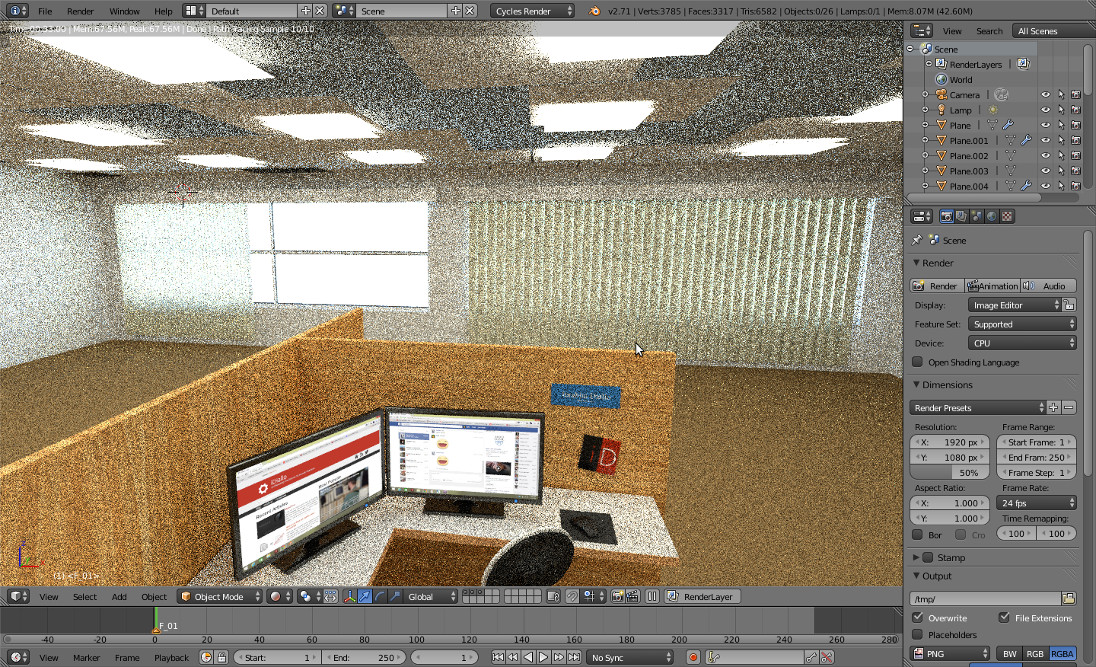 I didn't even model the whole chair, because the camera does not go any lower. I just needed the back. 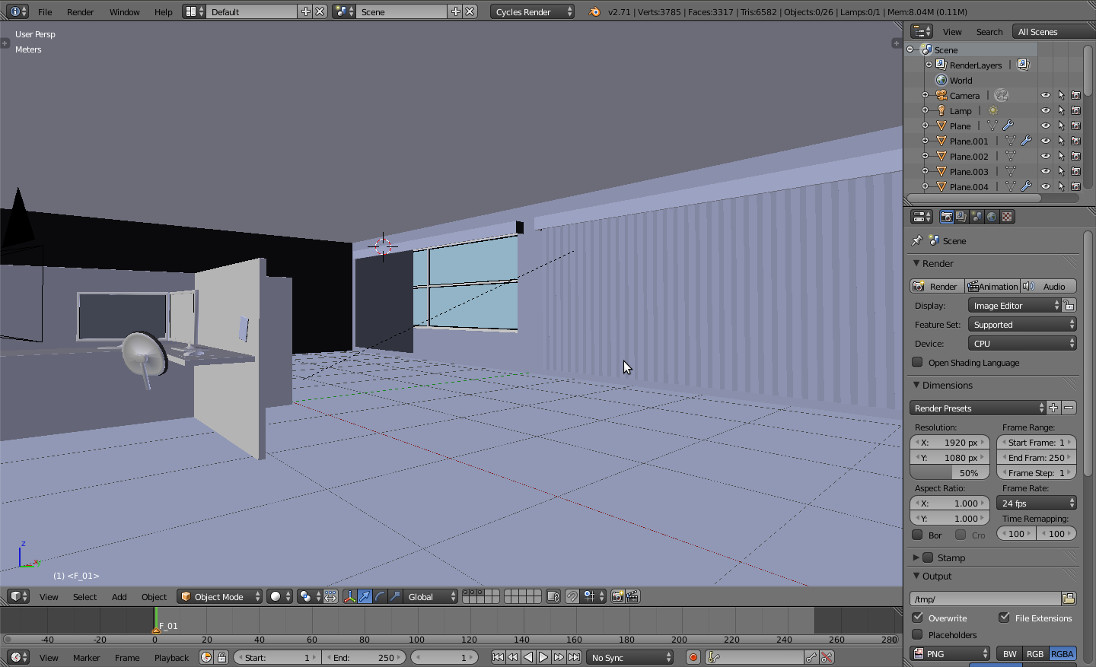 I modeled everything on scene based on this camera view. 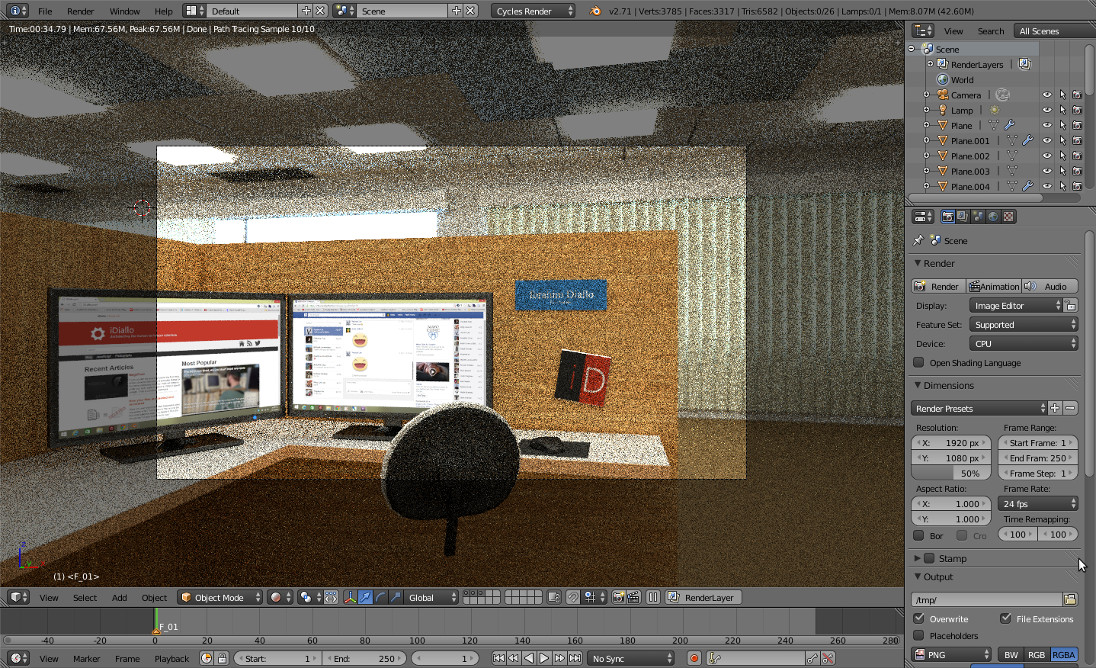 I feel a little guilty when I see the room this empty, but who cares, it is not supposed to be seen anyway. By the way, the carpet was a mistake I forgot to plug in the texture coordinate but it looked way better than what I had planned, so I went with it. 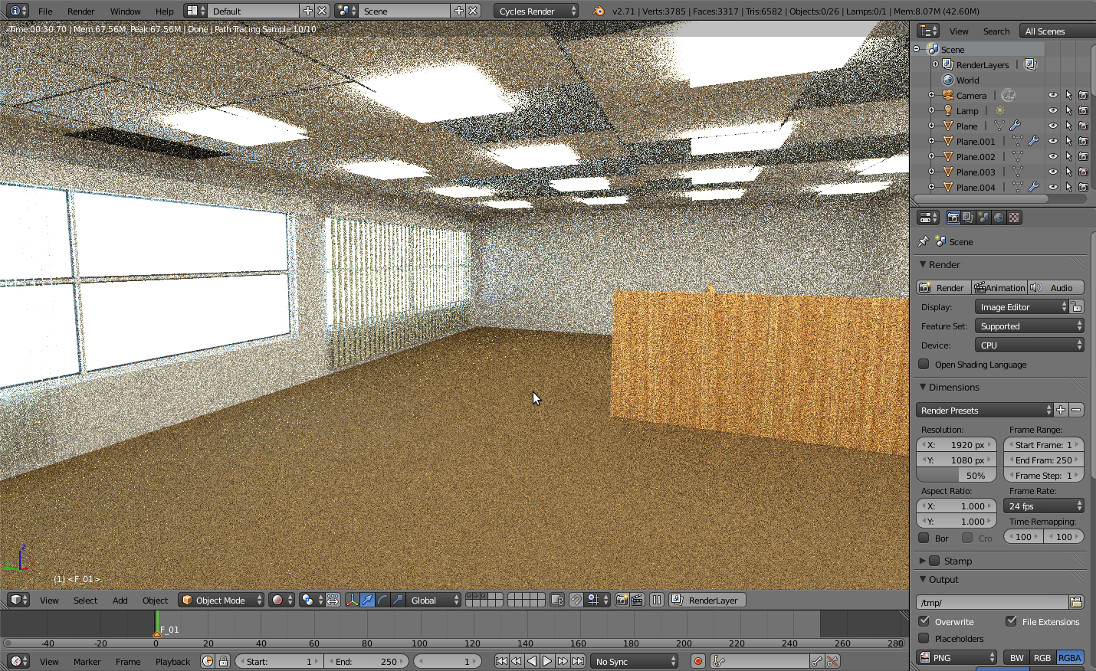 For the outside of the office, I wanted to have light bursting from the window. The way it kinda looks like when you are in a dark room looking at the exterior in a sunny day. I don't know if it worked exactly the way I wanted but, I think it's ok for this seen. 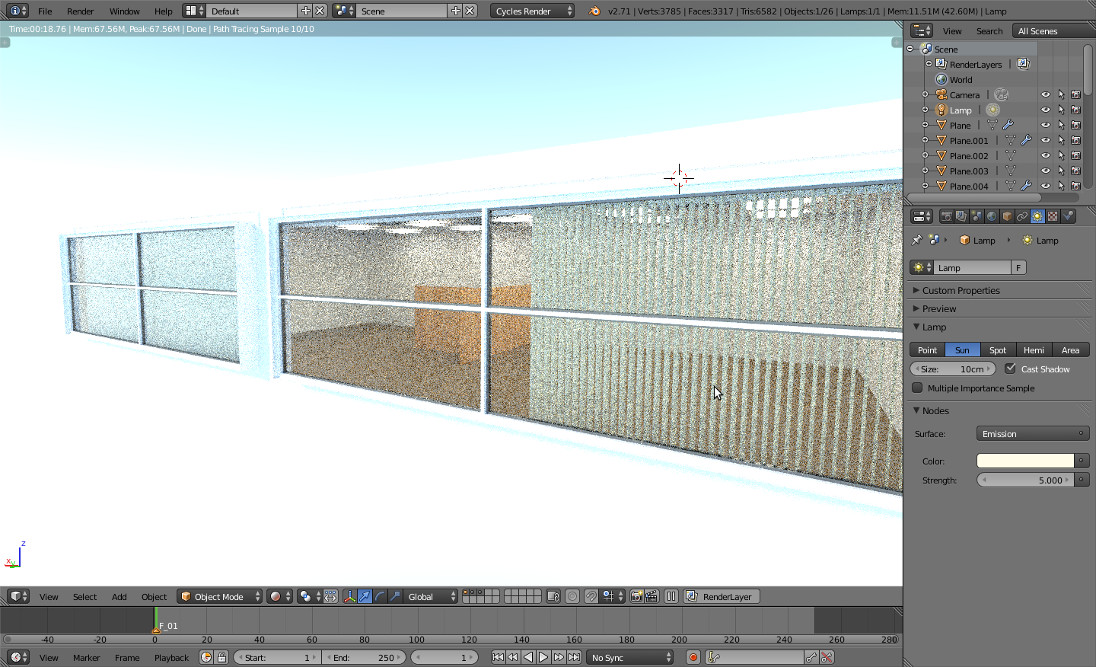 For someone who is not very artistic, I think this can pass. I know the more I do it the better I will get, and I hope I can make more and more renders for my blog.

If you are wondering what is the context of this 3D render, it's for one of my blog post. "Switching to Open Plan office killed more than productivity". I guess the title is self explanatory. Check it out.

Feel free to leave comments there or on twitter @dialloibu