You will be surprised how fast windows XP is when it is not bloated. Because I had a copy of Norton's Antivirus free for 3 months, I decided to install it. It was the worst decision I ever made. The computer became "secure" with the price of being terribly slow.

I considered myself a power user. So when I get a virus, it is not such a big deal as if my mom got one. I could find a solution. So on that day, I decided that I do not need an antivirus ever again. I removed it, and the computer came back to its almost normal speed.

What are anti-viruses anyway? A lot of times, people would ask me which one I recommend, I would answer that I don't know. I don't use one. Other times I would be telling people that they are useless and they would say, that's because you did not try AVG.

An antivirus is a software that compares your files to a large list of blacklisted application. Although the company advertises the large number of threats they can protect you against, what really matters is how up to date it is.

There were many occasions in the past when I was infected while the antivirus was running. It did not make a peep, it did not show a notification. Well, maybe my list was not up to date.

I learned the hard way that in order to protect myself, I can't just have to install an antivirus and forget about it. Instead I would have to be vigilant. With newer versions of Windows, there are less risks of getting a virus. Why? Because applications can't run as administrators by default.

The most common way to get a virus in your machine is through social engineering. Those ads that ask you to install a download manager for faster download are nothing but a way to trick you.

If you are vigilant, you can avoid most viruses. And that was my antivirus for the past 8 years. I never randomly download files on the internet (until last week).

I managed to get the main computer at home run windows through a VM, this way if it was to get infected I just need to delete, copy and paste a knew instance of the OS. It worked. Eventually I switched my family to Ubuntu, because the browser is all they use anyway. I still see a lot of automatically downloaded files on the download folder but they are harmless since .exe don't run on linux.

But last week, I wanted to do a podcast with a friend and somehow I got my computer infected with an adware.

I was trying to figure out how to record both the sound from the microphone and the sound coming from google hangout. I struggled a little and decided to download one of those screen recorders. I thought maybe this could do the job.

I had heard of camtasia before, I didn't know if it was free but I had my friend on the line as I was trying things. I went on google and couldn't remember the name. I typed cam and camStudio was suggested. I clicked on it, and it showed free download. I have seen many respectable video bloggers use the application so I trusted it without any thought.

I downloaded, clicked on next blindly and accepted to run as admin and ... I was infected. I saw some unusual icons on my desktop and my browser crashed. When it reopened, all the pages I had opened were filled with ads. 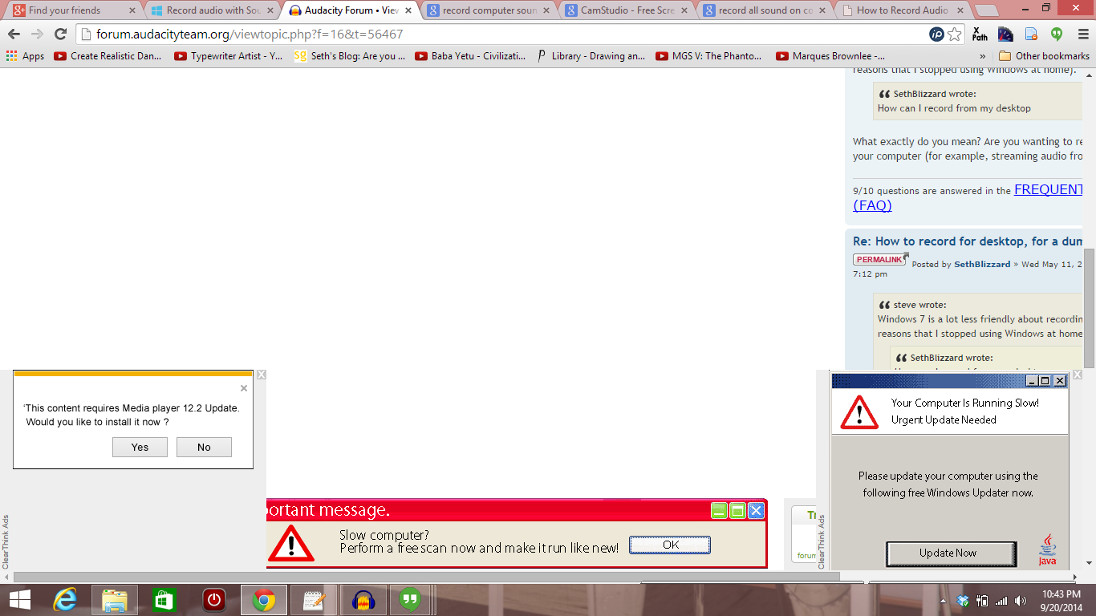 Yes, after 8 years of sobriety, I finally fell for it. I downloaded a virus from the internet. I quickly recorded the podcast (not with camstudio) and then tried to fix the problem.

Throughout the years, if I ever had to fix someone's computer infected with a virus, I would use Malwarebytes. It is the only one I ever trusted and did a good job as a Médécin après la mort.

So I installed it, scanned it to remove the infected files, then restarted. It is interesting that even Malwarebytes that is very lightweight compared to others slowed my computer drastically. So after the job was done, I deleted it from my machine and we are back to normal speed.

By the way, the computer that was infected is an Acer laptop running Windows 8.1. It took 2 hours to completely fix it.

This is something all of us have to go through. I did not have to deal with this in so long that I had forgotten the pain you get when your computer stops responding and litter you with ads.

If there was a way to have an antivirus that doesn't use all your resources than I will be all for it. But for now, I will have to remind myself why I stopped using them in the first place, and how to prevent a virus from ever getting to my computer in the first place. 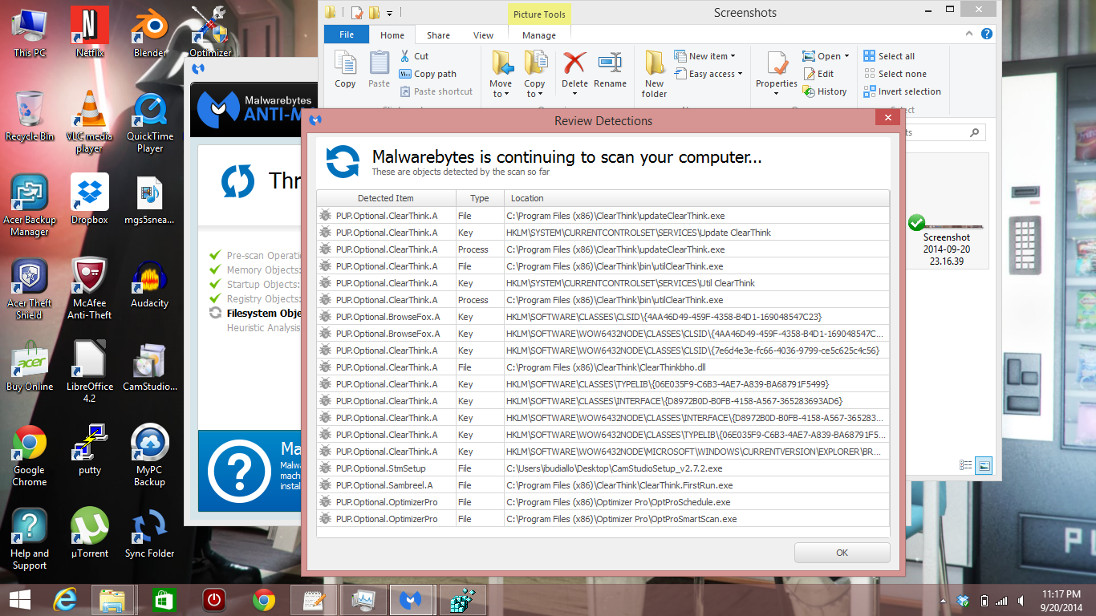 I imagine if it was my parents that had this problem, they would just have to buy a new machine because there will be nothing they can do about it. Googling spyware protection only shows you links to more spyware.

Not that there are no viruses on Linux machines, but at least, it's nice to know that no application can run as administrator without my consent. And that's the kind of anti-virus we should have in all Operating Systems. A better education.

Nobody ever won 1 million dollars from clicking on an ad. Nothing is free. Your uncle in Nigeria did not pass away and leave you a fortune. You will have to use common sense to protect yourself. But then again, common sense is not that common. I am the living proof.

Follow me on Twitter, RSS Feed
Next: The start menu and the curious case of Windows 10
Previous: Timewarner slows down youtube and censor all information about it