2018 has been so busy that I have felt completely overwhelmed... In a good way. I feel like this is the year I grew the most both as a developer and as a man.

When the year started, I had taken a step back on the start up Renly. It was becoming hard with the terrible decisions that had been taken the year before. Having 4 co-founders to work with creates un-necessary frictions, and it is easy to lose track of which direction is being followed. I took a step back, not making the final decisions for a little while until things settle down.

At the same time, I started working a side project, ottomon, where I had full control of the entire enterprise. It helped me hone my old skills, and learn new ones like using minimum resources to scale an application infinitely (at least in theory.) And I decided to turn it into an actual product people can use.

While this is going on in the background, I also started working on a startup called "Thankful" where I am the second engineer on the team, building an A.I. for customer service.

This blog received more that 5 million views in a span of a week. Why? Well because I wrote a little story called "The Machine Fired me". This is by far the most read article on this blog.

This lead to being publish in hundreds of media outlets including BBC and the New York Times. I've had countless interviews and talked in radio shows in Every single continents. I am featured in books and one of my favorites is when I went to a book reading by Dan Lyons, a writer in the Silicon Valley show and author of the NY Best seller "Disrupted".

30 minutes into his talk, Dan Lyons started telling my story. Our eyes met for a second, and he stopped everything and invited me on stage. He asked me to seat on his chair, he gave me the microphone and sat with the audience. "Go on, tell the story." This was the second most awesome thing that ever happened to me.

The first most awesome thing that happened this year is getting married to Cara. I met her on April fools day, and on that very same day she said "We are so getting married." It could have been a joke when she said it. If it was, well, the jokes on her cause I did just that, I married her.

These were the highlights of my year, but of course there are the little things that makes up the everyday life that don't get mentioned, yet they are just as important.

Follow me on Twitter, RSS Feed
Next: Let's learn social media this time
Previous: How to do anything you want with programming

After a few years I have forgotten something as fundamental as bread and butter. 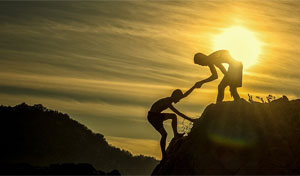 I'm not one to make resolutions every new year, but I often find myself asking others about their new goals for the year. Every year, I send wishes for fortune, success, or just a better life without putting much weight behind it. It is a courtesy or just the standard holiday greeting. But if there is one thing I want to wish to others and myself and actually mean it, it will be to make this year a year of personal responsibility.